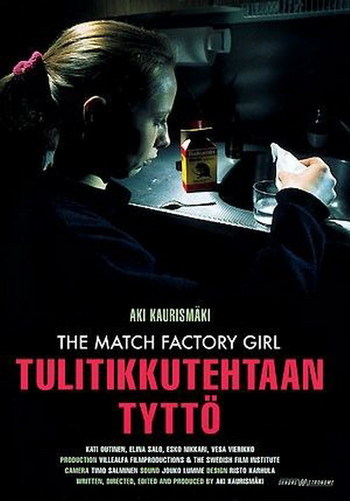 The Match Factory Girl is a 1990 film from Finland directed by Aki Kaurismäki.

Iris is a meek, mousy woman of maybe thirty years of age. She works a boring, mindless job on the assembly line of a match factory. She comes home to her mother and stepfather's shabby little apartment, where she is expected to do the cooking and the dishwashing. She sleeps on a couch, and she pays them rent. When she goes out for a bit of fun, namely to a dance hall, she's the only woman there who isn't asked to dance.

Iris treats herself to a pretty floral dress and goes clubbing. She meets a man, Aarne, who takes her home for sex. Iris is infatuated, but what she doesn't know is that Aarne thinks she's a prostitute. Disappointments and trauma pile on top of each other, until finally Iris snaps.