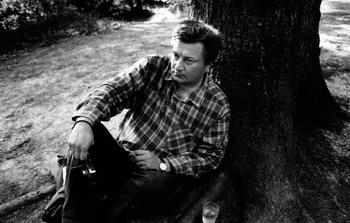 Aki Kaurismäki (born April 4, 1957) is the most famous Finnish film director. He started his career in early '80s as an assistant of his brother but soon overtook him in both creativity and acclaim.
Advertisement:

Kaurismäki is interested in the plight of the ordinary people of Finland. In his films he depicts their every day struggle against harsh conditions. Kaurismäki generally rejects both callous capitalism and inhumane state. Still his heroes usually find strength to triumph over their oppressors albeit very often in his trademark meek way. Often they succeed by joining together and showing their solidarity.

Kaurismäki is keen on retro stylistic values. His characters usually listen to archaic Finnish pub rock and rock'n'roll. They hang out in cafes which seem to be designed according to '70s taste. They are old-fashioned in every respect.