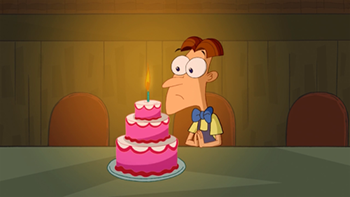 You've spent hours hanging balloons, decorations, and banners on the wall. You've cooked the food to perfection. The cake is ready, and the candles have already been lit. There's presents to be opened. You even have the music all sorted out. It's a perfect birthday party.

There's just one problem - nobody else is coming.

Birthdays are supposed to be a great occasion to get together with friends, when everything is about you. So when someone has only themselves with whom to celebrate their birthday, it's a sign that they really are alone.

Writers tend to use this trope to establish that the character in question is The Woobie (if Played for Drama) or The Chew Toy (if Played for Laughs). It may also be a Cloud Cuckoo Lander since these will often understand the "everything is about you" tendency literally (if a friend is with you, then not everything is, technically, about you).

Compare Not-So-Forgotten Birthday and A Birthday, Not a Break. Has absolutely nothing to do with Two-Person Pool Party.

The party starts out with just the protagonist celebrating alone, before two guests do show up.

The party starts out with just the protagonist celebrating alone, before two guests do show up.