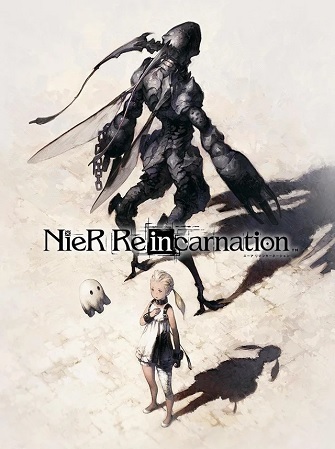 All Prayers Lead to The Cage
"Massive stone towers pierce an empty sky.
This enormous structure is called The Cage.
In its shadow, a lone girl walks with purpose...
And she will not leave until she has what she desires."
— Opening Monologue (“The Story of the Girl and the Monster”)
Advertisement:

NieR Reincarnation (alternately rendered NieR Re[in]carnation ) is a mobile spin-off set within the NieR universe developed by Applibot, released on February 18, 2021 in Japan for Android and iOS with a Western release following on July 28, 2021 and a Asiannote Taiwan, Macau, Hong Kong and Southeast Asia release due in July 2022.

The world takes place within Cages, a series of towers and dungeons, sometime in the future. A girl awakens on a stone floor with no voice and no memories. She is greeted by a strange being calling itself Mama. In order to restore what she has lost and to redeem herself from a past sin, the girl and Mama travel to reawaken fragments of a forgotten world in a form of the Weapons from the Dark Scarecrows.

However, each Weapon contains a threat, in a form resembling a flock of crows, that tries to corrupt its memories. Thus, the girl is tasked to aid Memory Characters to eliminate these invasive enemies within in order to restore the Weapons’ original flow of its story. This in turn will help her restore her memories.

As they ascend higher levels of the Cages, they run into a Dark Monster, with motives unknown whenever it appears to them and flees, as if leading them for some reason.

The first main story arc, "The Story of the Girl and the Monster", concludes in twelve chapters. After the ending of the first story, the next main story arc, "The Story of the Sun and the Moon", was teased, which was released on October 20, 2021. This next story arc follows two high-school students from modern-day Japan as they're transported to the Cage. While both are determined to get back home, players can choose the Sun route (a girl trying to reconcile with her father) or the Moon route (a boy trying to save his mother).