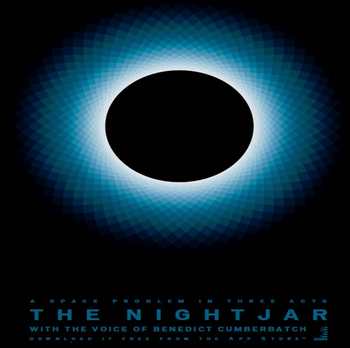 The Nightjar is a 2011 iOS game about the titular spaceship that is slowly being pulled into a collapsing star named the "Black Dog." You play as an unnamed passenger on the ship, who is left behind after the star collapses, and must make his way through the ship to escape. Soon after the passenger starts his journey, he meets a mysterious man, Dickie Von Kolding, who claims to be on a ship two days away from The Nightjar, and is at odds with an eerie computer that is sentient, and soon he hears an announcement that something not human is on the ship with him...
Advertisement:

It is noteworthy for featuring the voice of Benedict Cumberbatch as the guide, and it's unique gameplay twist of using only sound, with the player having to guide the passenger by trusting only their hearing.