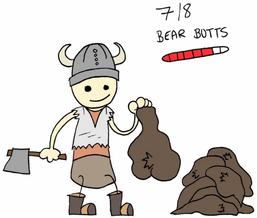 He's actually killed 25 bears so far.
"That's all? One quest? Surely you jest. Are there not bear asses to collect? Perhaps a rare flower that I could pick from which you will make some mildly hallucinogenic tonic which you will then drink, resulting in visions of a great apocalypse? Perhaps the local populace of mildly annoying, ill-tempered gophers are acting up and need to be brought to justice? No? Nothing?"
— Johnny Awesome, World of Warcraft
Advertisement:

A type of Fetch Quest that involves going around killing enemies and collecting a certain amount of a specific item that these enemies randomly drop. They are most common in MMORPGs. The common hypothetical example involves a woodsman NPC asking the Player Character to deliver 20 sections of bear to him.

This sort of quest can draw attention to the inherent Fridge Logic of Random Drops, such as when the drop in question is a vital body part that all monster corpses should have, like a liver, feet, skin, or a head. This can make sense if the part needs to be intact for its purpose (like making armor from an animal pelt), and the body part may have been ruined during the fight. However in some cases only pristine bear asses will do, even when the woodsman just wants proof you killed twenty bears. That is one picky woodsman. How you kill the bear rarely affects the odds of its ass being dropped, either, so psychic or spiritual attacks are no more likely to get an intact drop than attacks that reduce the target to Ludicrous Gibs or burn it to a crisp. The opposite can also happen where the player may receive multiple random drops from a single creature, if it makes logical sense for the creature to carry more than one of the item.

This type of quest frequently does not fit in thematically with the other events in the game, but is easily inserted arbitrarily inserted into any location the player is at (Lava Bears, Mist Bears, Greater Bears, Hellbears, Sea Bears....) as long as there's a bear with the perfect ass required to produce some kind of magic spell or... whatever. It may not make sense for the player characters to accept them, and, in the worst case, may be a form of Fake Longevity comparable to a Fetch Quest.

Frequently overlaps, either in the same quest or same area, with Mass Monster Slaughter Sidequest. Compare Cash Gate, which requires you to collect something useful to proceed, usually money.

If a webcomic or something else parodies MMORPGs, expect to see this trope parodied every time.

Not to be confused with Cheek Copy, which could result in 20 bare asses, nor does it involve Ass Shove.