Literature / The Knights of the Cross 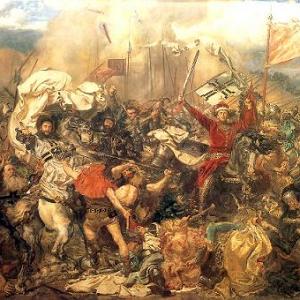 The Knights of the Cross (Polish: Krzyżacy) is a 1900 historical novel written by Henryk Sienkiewicz, a Polish writer and Nobel laureate.

The novel was written in partitioned Poland, with most Poles living under the rule of the Russian Empire - one of Sienkiewicz's goals in writing The Knights of the Cross being to encourage and strengthen Polish national confidence against the occupying powers of Austria, Prussia, and Russia. To circumvent Russian censorship, Sienkiewicz placed the plot in medieval Prussia (region) and the State of the Teutonic Order. He used offences (well known to his readers from the newspapers) perpetrated in his own time by the Russians to fill in the details.

The actual, historical religious military order of The Teutonic Knights, which from the 13th to the 16th centuries controlled large parts of the Baltic Sea coast, and its defeat in the Battle of Grunwaldnote  known in German historiography as the Battle of Tannenberg (1410) by Poles and Lithuanians, serves as backdrop for the story, which also focuses extensively on medieval life and customs in both the cities and the rural part of medieval Poland.

The novel inspired a 1960 film adaptation which was one of the most popular Polish films up to that point.

The book and its adaptations contain examples of: