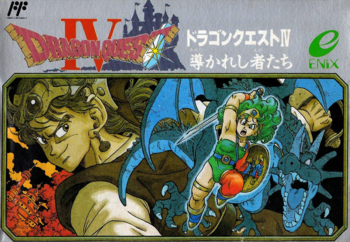 "There's an old, old legend of an angel swooping down from the sky to the northern mountains. She fell in love with a young woodcutter, and a beautiful baby was born to them.... What happened to the baby? I have absolutely no idea. I'm sure it's just a faerie story, anyway."

The fourth Dragon Quest game, Dragon Quest IV: Chapters of the Chosen (DS title) kicks off the Zenithian trilogy with a distinctive twist on the usual Chosen Heroes plot... by having the player step into the shoes of each of the Chosen Ones in turn, rather than dumping you into the role of Hello, [Insert Name Here] and sending you off at the start. Our heroic roster:

The game thrives on And Now for Someone Completely Different, introducing you to each of the chosen in turn and adventuring with them, learning what drives them and seeing how their story goes before the call catches up with them.

Originally for the NES, Dragon Quest IV was notably the last game in the series to see an official English release until Dragon Quest VII hit the PlayStation. An Updated Re-release also hit the Playstation — and was advertised on the back of DQVII's manual — but the plan to bring it over fell throughnote This was at least justified for once; the developer went out of business, so there was no one to program the English text. Getting some other company with no prior knowledge of the game's code to hack it and insert a translation sadly would have been too time-consuming and expensive to be worth it., so English fans didn't see an update until the DS version was ported over.