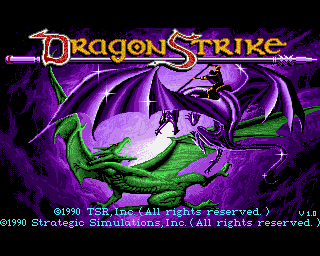 Dragon Strike is a Dungeons & Dragons flight simulator by Strategic Simulations, released in 1990, and pretty fun.

The game is set on Krynn during the War of the Lance. Player assumes the role of a young Solamnic Knight and flies his dragon through a series of increasingly challenging missions to defeat enemy dragons and other creatures in the skies above war-ravaged land.

You get a chance to ascend through the ranks of Solamnic Order, obtain useful magic items and more powerful mounts (bronze, silver and, finally, gold dragons) as you push enemy dragonarmies towards final showdown above Neraka.