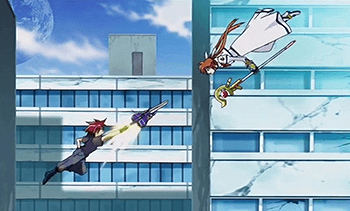 No horses required.
"We've completed analysis of the enemy craft. Codename: Morgan. This plane is protected by an ECM defense system. Its only weak point is in the front air intake. You'll have to attack it head-on."
— AWACS Eagle Eye on the Final Boss, Ace Combat Zero: The Belkan War
Advertisement:

A Fight Scene trope applied to two characters that can fly without using some sort of vehicle. Air Jousting involves two combatants flying at each other at high speed and smashing together, much like Medieval knights on horses and can also be applied to characters riding flying mounts, such as dragons. If the combatants have weapons that resemble actual lances it becomes even more like jousting. If both are covered with a Sphere of Power then they'll bounce off each other like very destructive glowing ping-pong balls.

This is very common in Shōnen series, and is a logical application of Flying Brick powers, and likely to overlap with Beam Spam and Beam-O-War. If used to end the fight then it overlaps with Single-Stroke Battle. If combined with Gun Fu it's likely an especially bizarre example of Short-Range Long-Range Weapon.

Contrary to popular belief, head-on attacks were almost never a part of real-life Old School Dogfights (though there were exceptions, such as US airmen flying P-40 Warhawks against the Japanese), as it was an extremely risky maneuver that left both combatants exposed to fire and provided only a brief opportunity to line up a shot, and to boot ran the risk of a fatal Midair Collision (a very real concern with subsonic WWI/WWII fighters). An "energy" attack might be a straight line, but involves attacking from the side or behind with a speed and/or altitude advantage, rather than jousting head-on. However, this behavior makes much less sense for characters with magical flying powers that allow them to turn completely around, flying backwards or sideways (even briefly) while maintaining their current direction and velocity.