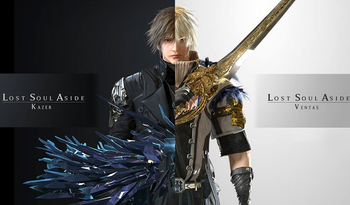 Lost Soul Aside is an Indie Hack and Slash game by Chinese animator Bing Yang, who originally created the concept as a test before deciding to make it a full-fledged game. The concept was inspired by the initial version of Final Fantasy XV and its teleportation mechanics. Bing Yang would use these mechanics as a template for a Stylish Action RPG that he first showed off with a trailer in August of 2016.
Advertisement:

The internet was very impressed, to the point where Sony and Epic Games both contacted him to help work on the project. He took the sum of money from Sony in exchange for making it a timed exclusive on the PS4, and was given a small team to help work with it. Bing initially aimed for a release sometime in 2018, but retracted his claim later on due to development taking longer than expected. In August 2019, Bing Yang reported that development was focused on the main build of the game, implying that a 2020 release was very likely until the COVID-19 epidemic began. Any news on the game's development was silent until April 26, 2021 when Bing Yang released a new gameplay trailer, as well as sharing numerous images from in-game.