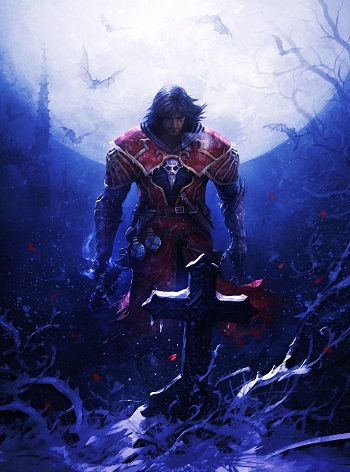 Dark times need a dark hero.
"Such a sad tale is ours. A tale of heroes who strove to save humanity, only to lose our own."
— Gabriel Belmont
Advertisement:

Castlevania: Lords of Shadow is a 2010 action adventure reboot of the Castlevania franchise developed by MercurySteam with oversight by Hideo Kojima and published by Konami for PlayStation 3, Xbox360 and PC. Upon its release, the game was the first true 3D Castlevania title since Castlevania: Curse of Darkness for the PlayStation 2 and Xbox in 2005.

Taking place in an Alternate Continuity from the previous games, the story concerns Gabriel Belmont, an orphan raised by the Brotherhood of Light on a quest to defeat the eponymous Lords of Shadow. Earth has been cut off from the Heavens, leaving the souls of the dead forever trapped in the mortal realm and giving unholy abominations free rein to prey upon the human race. In these dark times, humanity's only hope lies in Gabriel fulfilling the prophecy of a pure-hearted warrior who will unite the powers of the Lords of Shadow and restore balance to the world. Gabriel himself also has a personal stake in the matter: his wife Marie was recently killed, and he hopes the power the Lords of Shadow guard, pieces of an ancient relic called the God Mask, will give him a way to bring his love back.

Traveling through ancient groves, mausoleums, forgotten temples, swamps and castles, Gabriel must face all manner of characters both mortal and immortal,note Many of whom had appeared in previous Castlevania games, but who were originally public domain characters to begin with. and come to terms with his own terrible destiny.

In April 2017, Konami announced they were adapting the Lords of Shadow sub-series into a pachinko machine