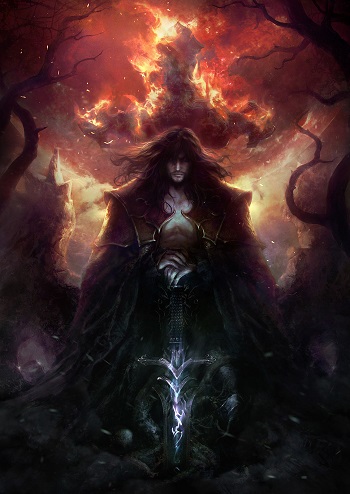 Blood is Everything
"Once I was strong. Powerful beyond measure, beyond imagining. It has been an age since I last fed... but I will return. I will live again. I will have my vengeance. Nothing will stand in my way. They will pay. Even if it takes an eternity, they will pay... For I am the dragon, Dracul! I am the Prince of Darkness! That... is my vengeance."
—Dracula
Advertisement:

Castlevania: Lords Of Shadow 2 is an action adventure game developed by MercurySteam published by Konami for PS3, Xbox 360 and PC, and the sequel to the 2010 Castlevania Continuity Reboot Origins Episode Castlevania: Lords of Shadow (aka God of War in Europe with friggin' werewolves). It was released in North America on February 25, 2014; Europe on February 27; and the UK on February 28; a demo was included for free with the download of Mirror of Fate HD.

At the end of Lords of Shadow, Gabriel Belmont gave up his humanity and became the vampire lord Dracula. But after a millennium of war with those who betrayed him, even he yearns for release from his immortal bonds. In the modern day, a weakened Dracula's only hope lies in a final task: fight through the forces of Hell and Earth to face a powerful enemy from his past one last time. But to do so, the vampire lord must reacquire his old powers – and only his castle holds the key.

The first, and only, batch of DLC, titled "Revelations", released on March 25th, and follows Alucard.

Due to the Twist Ending in the first Lords of Shadow, expect unmarked spoilers.

Lords of Shadow 2 provides examples of: