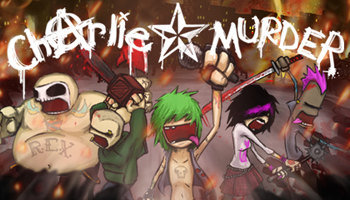 The Punk Rock apocalypse is here!
I'm Charlie Murder
and murder is my name!
I'm the king of rock and roll.
I'm stompin' on fortune and fame.
— "Mnemonic Atomic"
Advertisement:

Charlie Murder is a Side Scroller Beat 'em Up game from Ska Studios, playing a bit more like the classics that inspired it than their notoriously breakneck Dishwasher series.

Charlie is the lead singer of the titular band, Charlie Murder, a massively popular Punk Rock band. But on his rise to fame, Charlie and the band happened to spurn Charlie's former friend, Paul. Powered by envy and jealously, Paul Bitterman strikes a deal with dark forces, becoming Lord Mortimer, lead singer of the Death Metal band Gore Quaffer. In a short span of weeks, a massive rivalry between the two bands builds up, eventually culminating in Gore Quaffer's bassist Circe Bathory starting a fully blown zombie apocalypse, and the lot of them shortly thereafter beating Charlie Murder within an inch of their collective lives. Charlie and crew narrowly survive, pull themselves together, and set out to set Gore Quaffer straight once and for all.

The gameplay model, referred to as a "BrawlPG" by the developers, plays out as an unusual mix between River City Ransom, Borderlands, Final Fight, and The Simpsons arcade game. Fallen foes drop pocket change which can be used to buy food and clothing. Food and drink provide both healing and permanent stat boosts, while clothing provides a whole host of benefits: torso clothing primarily provides significant defense boosts and elemental resistances, hats strengthen your character's magic power (here referred to as Anarchi), and gloves strengthen your punches and kicks, as well as adding some extremely splashy elemental damage. All of the clothing can also have tangential enchantments that are harder to quantify, such as life-steal, stun chance, or causing stasis on knockback.

Keeping with the RPG theme, each of the five band members of Charlie Murder have their own RPG-styled character class:

From June 16 to 30, 2014, the game was made an available for free for Xbox Live Gold members on Xbox Live's "Games with Gold" program.

Tropes in the work include: