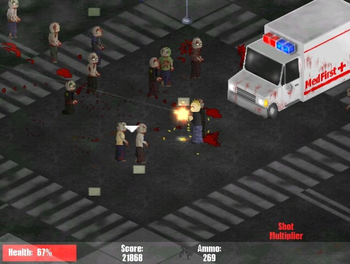 Rabid dog bites mailman. Rabid mailman bites dog owner. Citizens start biting other citizens. Armed militias start fighting against the dug-in remnants of the police. Stranger things start happening. Civilization breaks down. And now you're out in all this, working for/against the police and the militia, bartering for goods and weapons, claiming territory from the zombie hordes or fighting the police and militia for it, investigating the strange phenomena, and just generally surviving.
Advertisement:

A Wide-Open Sandbox isometric shooter summed up as a mixture of Silent Hill, Robotron: 2084, Dead Rising and Grand Theft Auto, Survival Crisis Z is a 2004 Windows PC game that puts players square in the middle of a city torn by roving undead, bitterly opposed factions, strange mysteries and bizarre phenomena. It's been freeware since 2007, so get it here