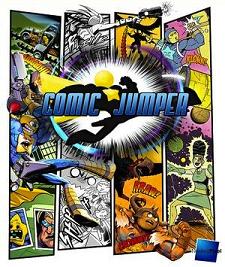 Meet Captain Smiley. With his super powers, dual laser guns, winning personality, and wisecracking Chest Insignia Star, he's sure to be the next comic book sensation... or he would be, if anyone liked his comic. Once his comic is cancelled, the fine folks at Twisted Pixel offer Captain Smiley a way to revive his series: make guest appearances in various other comics until he's popular enough to get his own back.

Gameplay consists mainly of traditonal side scrolling whilst shooting anything that moves with the usual platforming and some melee thrown in. The standard action is broken up with on-rail third person shooting and quick time events. The game is very much a nod to the old school shooters of the 16-bit era and their harsher difficulty. There are no power-ups to restore health in-between checkpoints but this is offset somewhat by infinite lives.