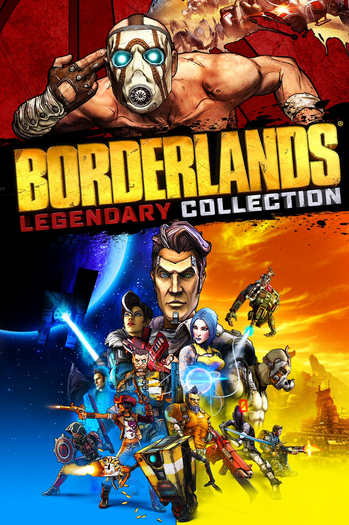 Welcome to Pandora.
"There was a legend... Many people tell it. The legend of the Vault. My father would always go on about the Vault; even with his dying breath. Advanced alien technology. Infinite wealth. Fame. Power. Women. So you can understand why some little kiddos who hear the stories grow up to become Vault hunters. Well, I have a story you may not believe. But I tell you it is true. The legend of the Vault is real! And it is here, on Pandora."
— Marcus Kincaid
Advertisement:

Borderlands is a series of Space Western Hero Shooters with RPG Elements (or Action RPGs with FPS elements) for Xbox 360, PlayStation 3, Windows, and OS X developed by Gearbox Software — creators of the Brothers in Arms series and the three expansion packs for the original Half-Life.

Each game follows a party of adventurers who arrive on the desert planet of Pandora in search of an alien vault said to contain vast stores of untold wealth, power and alien technology. The only problem is no one seems to know where these Vaults are, and finding them won't be easy — Pandora is a backwater world where no one wants to live, filled with mutated monsters and violent convicts left over from a Mega-Corp's previous mining operations. Aided by an extremely complex Randomly Generated Loot system that creates every weapon, shield and accessory you find, resulting in about Eleventy Zillion combinations, and some of the funniest and most irreverent writing in the history of video games, the player sets out to find the Vault and become a legend.

As the game has RPG elements, each title in the series has (at least) four player classes, each with an active skill and (at least) three skill trees to sink points into. The dusty, desert "After the End" setting allows the Real Is Brown level design to contrast with the brightly-colored loot and absolute bonanza of item boxes placed throughout the world; the art style is stylized somewhere between "Comic Books," "Storyboards" and "Cel Shading," often with visible cross-hatching lines deliberately drawn into the world. It's also used to justify the fact that Pandora's Hat is "Balls-to-the-wall Ax-Crazy," which is absolutely Played for Laughs (see above re: funny, irreverent writing). The game supports drop-in drop-out Co-Op Multiplayer, as well as Player Versus Player in certain arenas. Finally, it's the Trope Codifier for the "Looter Shooter" genre. The first game's Tag Line of "87 bazillion guns" is an exaggeration, but not much of one: its loot engine was estimated at being able to produce some eighteen million unique combinations, and it's only gotten bazilliondier since then. The franchise is in the Guinness Book of World Records for its profusion of weapon designs.

by Lionsgate in 2015. It was later announced

Tropes used in multiple entries in the franchise: