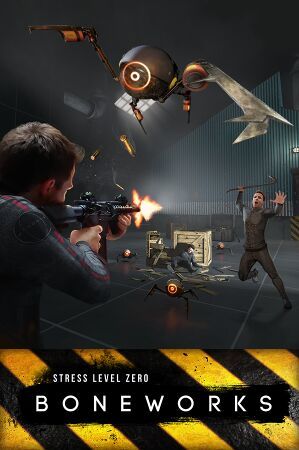 Boneworks (stylized in all caps as BONEWORKS) is a first person adventure game for VR systems by Stress Level Zero. It is currently available on Steam and the Oculus Store, and launched on December 10th, 2019.

The story takes place within the MythOS system- a highly advanced virtual reality world that allows the user to inhabit a space of seemingly infinite size. Thrust into this strange landscape, you are forced to use everything in your arsenal to survive.

Boneworks prides itself on its highly detailed physics based system, where guns, melee weapons and whatever you can get your hands on reacts to the environment. The game incentivizes the player to experiment and approach the challenges the game throws at them however they please, and shifts between puzzle-solving, action setpieces, shooting, and exploration in a constant Gameplay Roulette.