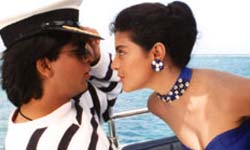 Behind the Child lies a Man. Behind the Man lies the psychopath
"Sometimes, for winning, one has to lose. And those who win by losing they call Baazigar"
— Ajay Sharma
Advertisement:

Baazigar, literally meaning "Gambler" in Hindi is The Film of the Book, a Kiss before Dying and a psychological thriller about a man who would do anything to avenge the wrongs done to his family.

Villain Protagonist Ajay Sharma vows to bring Madan Chopra down to his knees for abusing the trust of his parents, cheating them of their business, indirectly leading to the death of his father and infant sister, propositioning his mother and destroying his mother's sanity. To do so, he decides to charm Madan's two daughters, Seema and Priya, separately from each other and to dispose of anything in his way that stops him from his objective.

He charms older sister Seema and becomes her secret lover. He convinces her to keep their relationship a secret because of his poverty but little does she know that he is pulling an elaborate Xanatos Gambit that would lead to her...just wait.

He impersonates and dons on another identity, as a man named Vicky Malhotra, a rich man who races for fun and makes a living selling sports cars. He manages to charm Madan Chopra by deliberately losing the race and charms Priya by confessing that he lost because he could not bear her disappointment if her father lost. Unknown to both sisters, he dates them both on the sly. Priya tries to arrange a date with her sister to talk about Vicky but circumstances lead to her to cancel this date. We are introduced at this point to Inspector Karan.

Meanwhile, Madan Chopra arranges a marriage for Seema and when she goes all distraught to Ajay, he convinces her that suicide is the only option and that they both should write a suicide letter. After she gives him the letter, he pretends that he was just testing her resolve and proposes that they get married the next day in a Registrar office. As soon as she arrives the next day, Ajay pushes her off from the balcony. The case is ruled a suicide (because of the suicide note) though her sister Priya is not convinced. As she suspects that Seema's lover might be her killer, Ajay starts to wipe out all evidence linking him to her, including people.