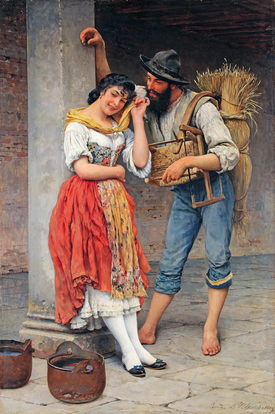 The Spider and the Fly, by Eugen de Blaas (1889). Guess who is who?
Advertisement:

The Jack-the-Lad. Cocky, cheeky and devil-may-care, he's the type of guy you can't help but like, even as he's wrapping you around his little finger. Especially if you're a woman — most of the time — and the Charmer knows this all too well. If the filing cabinet he needs to get into is guarded by a pretty secretary, all he has to do is smile, and he'll walk out with the file he wants and the secretary's phone number.

There's definitely a hint of The Casanova about him, but he's generally a lot kinder, more decent and less concerned solely with getting his end away; where the Casanova would ultimately do anything, no matter how underhanded, to score a conquest, only to discard her once he's achieved his pleasure, the Charmer knows what the limits are. He certainly doesn't mind the fact that he can have any woman he wants, but he'd never stoop so low as actually take advantage, and is often a lot more chivalrous in his dealing with women. The Charmer generally doesn't set out to break hearts; it just seems to be an unfortunate byproduct. But even if he's Looking for Love in All the Wrong Places, the Charmer's usually too relaxed in his lifestyle to really consider changing.

Also, where sex is the The Casanova's ultimate driving goal, with the Charmer it's usually a welcome extra; he often has bigger fish to fry, and ultimately knows his priorities. If he's not the main character, then he's a loyal friend (even if the main character is seething with jealousy at how easily things — and women — seem to come to the Charmer).

In short, what separates the Charmer from the Casanova is sincerity.

Compare with The Casanova, Chick Magnet, Prince Charming, All Girls Want Bad Boys and Ethical Slut. Often fills the role of a Loveable Rogue or The Trickster. Sometimes, he's so charming that Even the Guys Want Him. In a group they're likely to be The Face for their ability to get along with anyone, or (for more manipulative examples) The Social Expert.

With his bishonen looks and charisma, Captain Chevalier is able to captivate numerous people through his singing, including the Fivemen girls.

With his bishonen looks and charisma, Captain Chevalier is able to captivate numerous people through his singing, including the Fivemen girls.