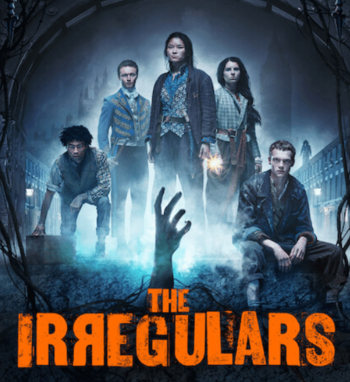 Created by Tom Bidwell, The Irregulars is a supernatural crime drama based on the works of Arthur Conan Doyle, in particular those plucky street kids who often helped out Sherlock Holmes. The series premiered on March 26, 2021 and was cancelled in May that same year.
Advertisement:

In Victorian London, Dr. John Watson approaches a gang of troubled teenagers living on the streets, and ropes them into investigating a series of horrific and mysterious crimes, whilst his business partner - the elusive Sherlock Holmes - takes all the credit.

As the crimes begin to take on a supernatural edge, it's up to the Irregulars - alongside their prince-in-disguise ally Leopold to come together to save not only London, but the entire world.

The Irregulars provides examples of: