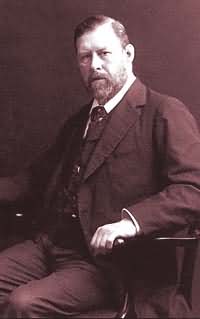 Abraham "Bram" Stoker (8 November 1847 – 20 April 1912) was an Irish author whose greatest and most lasting success was undoubtedly the prototypical vampire novel Dracula. In his own lifetime, he was best known as a theater manager and critic.

Apart from Dracula, Stoker penned about a dozen other novels, as well as a number of short stories. Most of these are less well known today, although The Jewel of Seven Stars and The Lair of the White Worm have also been adapted for screen.

The Horror Writers of America's Bram Stoker Award is named in his honor.

Works by Stoker with their own trope pages:

Trope examples from Stoker's other works include:

Portrayals of Bram Stoker in fiction include: