Literature / The Jewel of Seven Stars 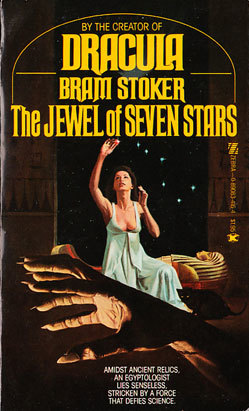 The Jewel of Seven Stars is a novel by Bram Stoker (most famous for Dracula). It was first published in 1903, with a significantly revised edition in 1912.

Abel Trelawney, a reclusive scholar of Ancient Egypt, is left unconscious after being attacked in his own bedroom by an unknown assailant. His daughter Margaret calls the police, a doctor, and her friend and confidant (and our narrator) Malcolm Ross. Margaret, Ross, Dr Winchester, and Sergeant Daw of Scotland Yard find themselves enmeshed in dark and mysterious events, centering on Trelawney's collection of Egyptian artifacts, which include a remarkable ruby (bearing seven markings arranged in the shape of the Plough

) taken from the long-lost tomb of the sorcerer-queen Tera. Evidence mounts that, whereas most ancient Egyptian rulers had themselves mummified to secure their rebirth in the afterlife, Queen Tera had a plan to secure her rebirth in this life...

How it all turns out depends on which edition you're reading. The original 1903 ending divided readers, and was replaced in the 1912 edition with a more conventionally happy and tidy ending. (Some doubt exists as to whether Stoker wrote the new ending himself, or even had any significant input.) Most later editions follow the 1912 text, though some return to the 1903 ending; the Penguin Classics edition includes both.

The novel has inspired several films, including the 1971 Hammer Horror picture Blood from the Mummy's Tomb and the 1980 Charlton Heston vehicle The Awakening. (So far none have used the novel's title.) Adaptations tend to throw out the novel's ambiguity and make Queen Tera an outright villain.