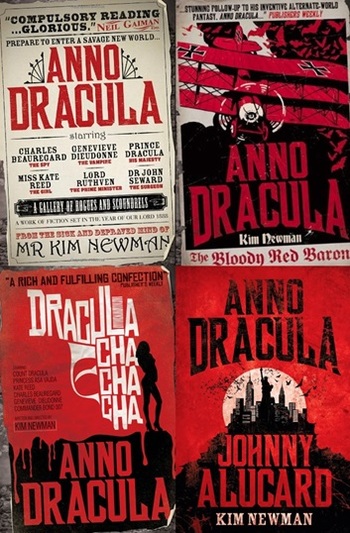 Good things come to an end. Bad things have to be stopped.
Advertisement:

The Anno Dracula series by Kim Newman is set in an Alternate History where Dracula defeated Van Helsing's group of vampire hunters and conquered Britain, resulting in vampires coming out of the woodwork and becoming visible (if not always exactly accepted) members of society.

One of the features of the series is that it is a Massive Multiplayer Crossover, with every significant vampire in fiction getting at least a mention or a cameo, along with an enormous number of other famous fictional characters who had not previously been associated with vampires. One of the main characters is Geneviève Dieudonné, this universe's version of the title character from Newman's Warhammer Fantasy series The Vampire Genevieve.

Works in the Anno Dracula series with their own page:

Tropes about the series as a whole:

Examples specific to the novel One Thousand Monsters:

Examples specific to the novel 1999 Daikaiju:

Other works in the Anno Dracula series provide examples of: