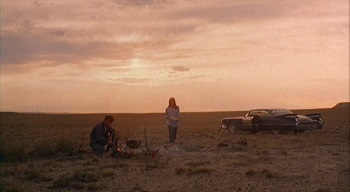 "Suppose I shot you. How'd that be?"
— Kit Carruthers
Advertisement:

Badlands is a 1973 film written and directed by Terrence Malick, starring Martin Sheen and Sissy Spacek.

Holly Sargis (Spacek) is a 15-year-old girl living in a small town in South Dakota in the late 1950s. She meets Kit Carruthers (Sheen), an anti-social young greaser and petty criminal ten years older than Holly who works as a garbageman. Holly's father (Warren Oates) forbids the relationship. Kit decides to run away with Holly, but when Holly's father interrupts him while he's packing her clothes, Kit impulsively shoots him to death. This begins a cross-country crime spree, as Kit and Holly flee through the badlands of South Dakota and into Montana, with bounty-hunters and police in pursuit.

Badlands was the first film by writer-director Malick. Orson Welles is probably the only other director to make as big a splash with a debut feature. It was Inspired by… the true-life murder spree of Charles Starkweather and Caril Ann Fugate across Nebraska and Wyoming in 1958, which also served as the basis of Natural Born Killers.