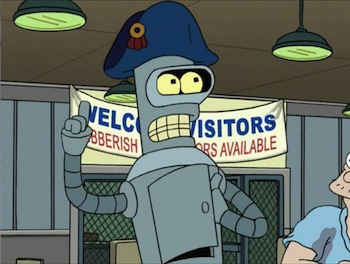 "All these other guys thinking they're Napoleon, when I really am!"note "I'm just trying to get through a difficult time using humor."
Mr. Cleveland: Now, my involvement in this won't be publicized, will it? I'm planning another run at the Presidency.
Lois: The Presidency?
Mr. Cleveland: To follow up my two previous terms in '84 and '92.
Lois: Mr. Cleveland, I—
Mr. Cleveland: Oh please, call me Grover.
— Lois & Clark, "Neverending Battle"
Advertisement:

A form of insanity far more common in fiction than reality, the delusion that one is a famous person, or at the very least the modern reincarnation of same. Napoléon Bonaparte is the most commonly used person for this, possibly because the unusual hat and hand-in-jacket pose are a strong visual that immediately identifies the delusion for the audience. God and Jesus are also frequently seen.

This trope is usually played for comedy, but can also be a bittersweet commentary on contemporary society.

It may also be used to bring extra hilarity to a person already suffering from Identity Amnesia.

Not to be confused with the trope The Napoleon or The Napoleon Complex, where a short person is hostile or violent.

Compare A God Am I. Contrast Thoroughly Mistaken Identity and Dr. Psych Patient. See also Daydream Believer and Otherkin, for people in real life or otherwise who believe they are reincarnations or representations of mythic/fictional characters, animals, or other things, obviously usually with much less delusion than in fiction. Note that in some religious sects people believe they are reincarnations of, vessels for, or possessed by spiritual beings. These are not the same as delusions, according to psychology and social scientists. People who are delusional usually perceive things which aren't there, fail to perceive things which are there, and exhibit other traits like psychotic rage, extreme narcissism or paranoia. Someone who holds beliefs that don't make sense isn't automatically delusional, despite the common usage of that word.

For cases where a character sarcastically claims to be someone famous, see And I'm the Queen of Sheba.

Another version of the joke adds a third patient.
Visitor: Well, who are you?
Patient 1: Napoleon Bonaparte.
Patient 2: Jesus.
Patient 3: What? No! I don't have a child that old!