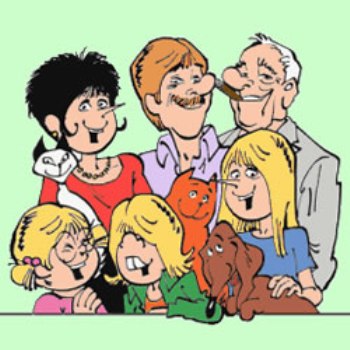 Jan, Jans en de Kinderen (translation: Jan, Jans and the Children) is a long-running Dutch comic book series that has been a mainstay of Dutch media since 1970. The gag comic appears in the women's magazine Libelle and centers around the everyday activities of a typical Dutch family consisting of father Jan, mother Jans, their teenage daughter Karlijn, preteen daughter Catootje, and (added to the series later on) toddler son Gertje. Other characters involve Jan's father, Catootje's friend Jeroentje, the family dog Lotje, and the family's cats (one Siamese, and one red, fat, lazy and snarky cat). It's family-friendly and therefore very popular in the Netherlands.