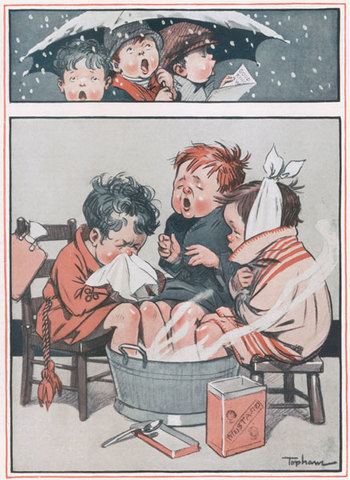 A character is given a hot foot bath as a treatment for either being cold or having a cold, which will be treated as the same thing. Very common in cartoons.
Advertisement:

This practice is derived from hydrotherapy

, which was popular in the 19th century, and remains so in alternative medicine circles. As such, this trope is related to Healing Spring, although it's performed with ordinary heated water, occasionally with mustard powder added

, rather than some kind of magical water.

Do not try this if you are actually suffering from hypothermia. Warming the extremities first can cause shock.

Captain Hook recovers from his last encounter with the crocodile

Captain Hook recovers from his last encounter with the crocodile