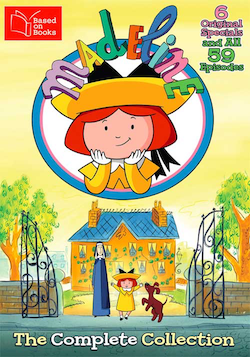 "If you believe you must be big in order to be tough
then you should get to know me. I'll teach you other stuff!"
—"I'm Madeline", the theme song of the TV specials and first series
Advertisement:

Although critically acclaimed animated versions of the Madeline books were produced throughout The '50s (the first was even nominated for an Academy Award), it wasn't until 1988 that CINAR and DiC created the widely remembered TV special based on the first book for HBO. It gave names to three of Madeline's friends (Nicole, Danielle, and Chloe) who would be present in later TV showings. The special was a success, so CINAR and DiC created more specials based on the rest of the books. The project also saw a soundtrack CD, "Madeline's Favorite Songs", with music from the specials released.

In 1993, after their partnership with CINAR had ended, DiC decided to make a Madeline TV series. Reusing the character designs, some of the talents (Christopher Plummer was held back by DiC as the narrator), and the Title Theme Tune from the old specials, Madeline's other friends were given names, and had various adventures that were not present in the books. Similar to the specials, the show was filled with catchy music. It premiered on The Family Channel. Some notable differences between the CINAR-DiC Partnership version and this version were new voice actors, some girls hair colors were changed, the animation was much better, and various supporting book characters made more appearances as well. In 1995, more episodes premiered on ABC Saturday mornings, under the title The New Adventures of Madeline. Following a second Soundtrack CD release ("Hats Off To Madeline"), the franchise went into a 4-year hiatus.

The silence ended when DiC made a direct-to-video movie, known as Madeline: Lost in Paris. The plot for this special involved a man posing as Madeline's uncle came to take her to bring her to a finishing school in Vienna, but it was actually a lace factory that put orphan girls to labor. This movie had a slightly different color palette than the 1993 version, and different voice actors. Released by Disney in 1999, the movie was later re-released by Shout! Factory on DVD, but removing all Disney idents.

This was immediately followed by the 3rd series, in 2000, when DiC made more episodes, also under the title The New Adventures of Madeline, with improved animation (to follow up with the direct-to-video movie). Also, the color palette changed again for a few of the girls. Many of the voice talents also changed in this version. This version of the cartoon premiered on the Playhouse Disney block of Disney Channel. A third soundtrack CD was released shortly after, "Sing-A-Long with Madeline", after which the franchise once again fell silent.

The next project involving everyone's favorite redhead is the direct-to-video movie My Fair Madeline (although it did air on Nickelodeon once), which was released silently in 2002, one year after the regular cartoon ended. The plot was Madeline and her friends going to stop a gang of thieves. There have been no new episodes of the show produced since and the franchise fell silent once more.

Unknown to a lot of people, another direct-to-video movie of Madeline called Madeline in Tahiti was released in 2007. Not much is known about this movie due to its mainstream obscurity. It's about Madeline and her friends going to Tahiti on a vacation and plot to stop a man's plans to make a volcano erupt so he can steal from the capitol when it is evacuated. Madeline also gets with a disagreement with Pepito and learns that The Power of Friendship is more important than a vacation. Trailers and clips are available on YouTube and it can be purchased on Amazon and iTunes. The movie is also on YouTube but it isn't available for every country. After this, the franchise seems to have ended.

The show focuses on a group of twelve girls who live at a boarding school with a nun named Miss Clavel in Paris, France. They live next door to the Spanish ambassador, who also has a young son named Pepito who is about the same age as the girls. Together, they all often end up on adventures, led by the bubbly red-haired Madeline. Though small, she never lets it get her down and is filled with courage, telling tigers "poo-poo" and finding courage no matter how tough things might seem. Whether it's becoming a famous artist, traveling with gypsies, or solving adventures, Madeline's adventures are rarely ordinary, and sure to be a lot of fun. The English language version of the cartoon is often peppered with French words and phrases, such as mes enfants and oui oui.

In addition to the tropes carried over from the books, the Madeline cartoons provide examples of:

My Fair Madeline provides examples of:

My Fair Madeline
It's time to go, au revoir,
Though you may shout, "Encore!"
That's all there is,
There isn't any more!
Feedback

Madeline and Pepito, stuck in a lion costume for the circus they're traveling with, sing a song about their homesickness that's so sad, it upsets the wild animals!

Madeline and Pepito, stuck in a lion costume for the circus they're traveling with, sing a song about their homesickness that's so sad, it upsets the wild animals!