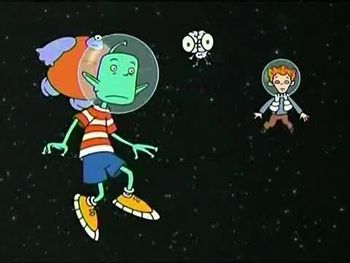 Lloyd!note Behind him from left to right: Kurt, Douglas and Eddie.
Advertisement:

Lloyd in Space was an animated television series from Paul Germain and Joe Ansolabehere, the creators of Recess, running from February 2001 to February 2004 for a total of 39 episodes.

Living far in the future, shortly after the end of World War Nine, 13-year-old Lloyd Nebulon is a 7th-grade green-skinned alien (of the Verdigrean race) who lives in the Intrepidville Space Station along with his telekinetic and telepathic younger sister, 5-year-old Francine, and his mother, Commander Nora Li Nebulon, the Head of Intrepidville. The show followed Lloyd and his friends Edward "Eddie" R. Horton, a Token Human teenage boy, Kurt Blobberts, an enormous simple-minded Blobullon, and Douglas McNoggin, a geeky, intelligent Cerebellian, and their adventures throughout Intrepidville.