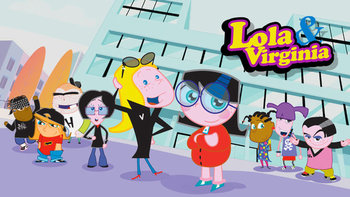 Lola and Virginia (2006-2007) is an animated series created in Spain by Imira Entertainment. It has since been dubbed into English and is formerly shown in America on Porchlight's Kid Mango website.
Advertisement:

Lola's life is not easy. She comes from a mildly poor family and routinely has to look after her two baby brothers. But she doesn't care, she has two good friends by her side and that's all she needs. Then comes Virginia, a rich, spoiled brat who always gets her way.

From the moment these two girls meet, they rub each other the wrong way. They're always trying to outdo and each get in each other's way. Lola does the best she can to stop Virginia from ruining other people's fun, but she isn't so innocent herself.