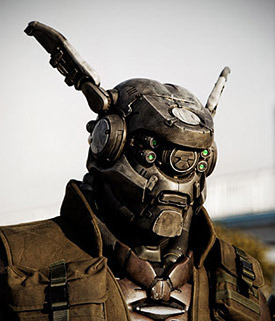 You won't BELIEVE the reception he gets.
Antimony: Hello. I would like to enter, please.
Robot guard: Robots onl... What's that on your head?
Antimony: These are my antennas, because clearly I am a robot.
— Gunnerkrigg Court
Advertisement:

A visual aesthetic where robots and other mechanical characters and beings can have antennae on their heads or other parts of their bodies.

A robot may have one antenna on the top or side of their head. They may have two for symmetry, or more. Antennae can be of any shape: straight, kinked or curled, and also can be plain or adorned with little orbs and other oddly-shaped accessories.

The antennae may have a purpose involving wireless communication like an older cellphone or walkie-talkie, as a sensor, or just to look cool and signal that the character is a robot.

Robot Girls in Japanese works (Anime & Manga, Visual Novels, and Video Games) tend to have so-called "antenna ears" as a visual indicator that the character is indeed a robot. Compare Robot Hair and Vertical Mecha Fins.