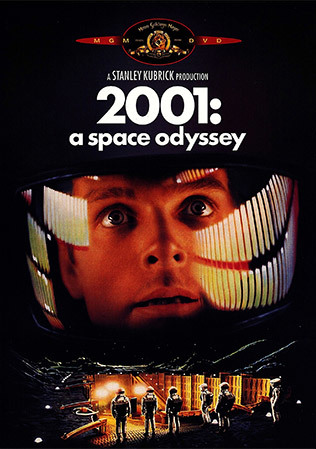 A 1968 Science Fiction film, written and directed by Stanley Kubrick, with help from Arthur C. Clarke (who also wrote a novel version in tandem with the film's production), and inspired in part by Clarke's short story "The Sentinel" note Originally published as "Sentinel of Eternity". It is regarded as one of the greatest and most influential films ever made.

Still one of the "hardest" sci-fi films ever made, it is known for its very slow pacing and enigmatic plot. It's also the reason you see "Thus Spoke Zarathustra"

Clarke went on to write three sequel novels which mostly followed the film's continuity. One of them was made into a movie as well (2010: The Year We Make Contact. 3001 is currently in development under Ridley Scott.

In 1976 Marvel Comics published a Comic-Book Adaptation of the film written and drawn by Jack Kirby, followed by an ongoing series which ran for ten issues. The first seven issues focused on the Monolith aiding humans in the past and the future. The last three focused on X-51 a.k.a. Machine Man, who was later incorporated into the Marvel Universe. The Monolith returned in the last two issues of X-51's 1999-2000 series, in which it was revealed that it had been created by the Celestials (in the Marvel Universe, at least…)

The film's iconic artificial intelligence HAL also made an unexpected appearance in the Massive Multiplayer Crossover videogame LEGO Dimensions- developed by Warner Bros. (as a result of the Time Warner/Turner merger of 1996, they own the rights to this movie). He pops up through a rift in the Portal level, interacting with- who else?- GlaDOS.

A Character Page is in progress here.