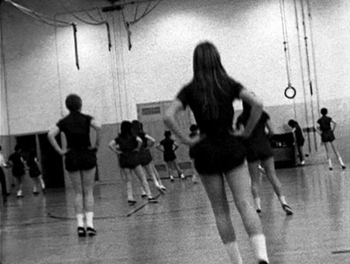 High School is a 1968 documentary feature by Frederick Wiseman.

The film is a portrait of a fairly ordinary American high school, specifically Northeast High School

in Philadelphia. Such standard school activities as classroom lecture, gym, band practice, and lunch are depicted. A running theme is the role of high school in imposing conformity and obedience in American teenagers, as authoritarian teachers stamp out their students' individuality and turn them into automatons, while reducing their "education" to rote banalities. The Vietnam War is a lurking subtext, as shown when a former student and current soldier visits an old coach, or in the last scene when a teacher reads a letter from a former student serving in Vietnam.