Film / The Young Girls of Rochefort 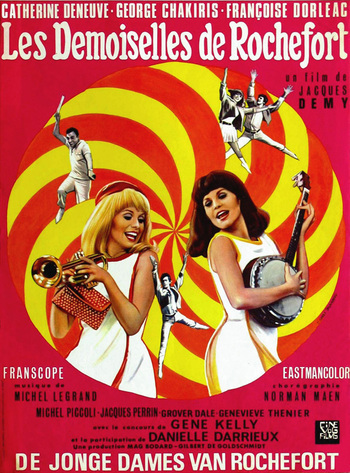 The Young Girls of Rochefort (Les Demoiselles de Rochefort) is a 1967 French musical film written and directed by Jacques Demy, with a score by Michel Legrand (music) and Demy (lyrics).

Set in the titular seaside town of Rochefort, the story follows twin sisters Delphine (Catherine Deneuve), a ballet instructor, and Solange (Françoise Dorléac), a music teacher. Both long to start a new life outside of Rochefort and to hopefully find true love. Throughout the film, the sisters' stories intertwine with those of a number of other characters:

All of them repeatedly cross paths until finally coming together, and the twin sisters depart for Paris with their newfound true loves.

The second collaboration between Jacques Demy and Michel Legrand, following The Umbrellas of Cherbourg. Though not as well-remembered as that film, it was a big success upon release, and earned an Academy Award nomination for Best Original Score (Original or Adaptation).

Catherine Deneuve and Françoise Dorléac were Real Life sisters. Sadly, Dorléac was killed in a car accident shortly after the film was released.

The Young Girls of Rochefort provides examples of: