Film / The Umbrellas of Cherbourg 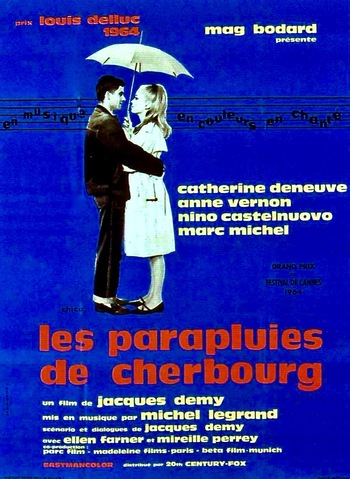 The Umbrellas of Cherbourg (Les Parapluies de Cherbourg) is a 1964 French musical film written and directed by Jacques Demy, starring Catherine Deneuve and Nino Castelnuovo, with a musical score by Michel Legrand. The film is unique in that all of the dialogue, even regular conversation, is sung.

Told in four acts, the film follows Geneviève (Deneuve) and Guy (Castelnuovo), star-crossed young lovers in the port city of Cherbourg. Geneviève works in a struggling little umbrella shop with her mother (Anne Vernon), who disapproves of her plans to marry Guy on the grounds that she's too young and he's not mature enough. On that note, Guy is suddenly drafted to serve in the war in Algeria for two years, leaving Geneviève devastated. The two make love for the first time before parting ways, and Guy promises that they will marry as soon as he returns.

Months go by, and Geneviève is saddened that Guy hasn't written back to her in ages. With the umbrella store struggling financially, her mother persuades her to marry a young diamond merchant, Roland Cassard (who was the protagonist in Demy's first film, Lola), who falls for Geneviève. Still missing Guy, it proves to be a painful decision for Geneviève. Not helping matters is the fact that she's pregnant from just before he left. With little to no hope left for her and Guy, she ultimately decides to marry Roland.

Meanwhile, Guy returns from war early from an injury. He comes home to find the umbrella store out of business, and learns of Geneviève's marriage to Roland. Struggling to cope with the anger and heartbreak, he later quits his job, and his grandmother passes away. Not knowing where to go, he ultimately finds a new love in Madeline, the caregiver to his late grandmother. The two soon marry, and with the inheritance from Guy's grandmother, they are able to build a family-owned gas station.

Four years later, Guy and Madeline have a young son, François. On Christmas Eve, Madeline and François go out for a short walk while Guy manages the gas station. Suddenly a car pulls up, driven by none other than Geneviève... let's just say, things do not end the way you'd expect from a movie musical of that era.

The Umbrellas of Cherbourg provides examples of: