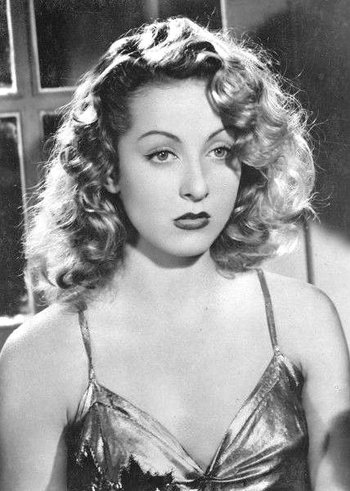 She had a long career, starting in 1931 and extending into the 21st century, appearing in over 110 movies. She is one of the more revered actors in France.

She was born in Bordeaux but grew up in Paris. Her long, long career started in 1931, when she was fourteen, with musical Le Bal. 1936 film Mayerling was her Star-Making Role. In 1938 she made a brief sojourn to Hollywood, starring in English-language film The Rage of Paris opposite Douglas Fairbanks Jr., but she soon returned to France.

She continued to work during the Nazi occupation, which caused her to receive some criticism, but her career suffered little after the war. In the 1950s she again dabbled in Hollywood, appearing in films like 5 Fingers and Epic Movie Alexander the Great. She was a talented singer; in musical The Young Girls of Rochefort, Darrieux was the only member of the cast who sang for herself.

Often cast by Max Ophuls, who directed her in some of her most famous roles. She was prone to playing Catherine Deneuve's mother in later years.