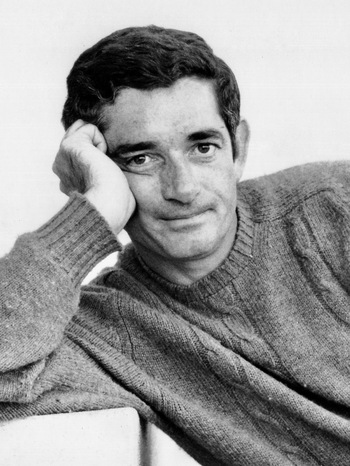 Jacques Demy (June 5, 1931 – October 27, 1990) was a French director, screenwriter, and lyricist best known for his musicals, although he also worked in other genres.

Demy directed his first feature, Lola, in 1961. It was released at the same time as French New Wave and the film was praised by the likes of Jean-Luc Godard. From then on, Demy would be associated with the New Wave, albeit as part of the Left Bank Group. He would go on to make a series of critically successful films throughout The '60s, but the only one to be a hit was The Umbrellas of Cherbourg, which also won the Palme d'Or at the Cannes Film Festival. Its score was composed by Michel Legrand, who would collaborate further with Demy.

Demy's reputation would decline in the late '60s, with French critics (after the events of May 68) lambasting him for not being political and American critics arguing that his films were uninspired imitations of American musicals. However, this ignores both the political subtext hiding in many of Demy's films, and the fact that Demy drew from a wide variety of influences (American musicals, French operetta, fairy tales, surrealism, manga, etc.) in order to create musicals with a distinct modernist bent that were actually quite different from traditional musicals.

Demy died at the age of 59 of complications from HIV/AIDS. His widow, Agnès Varda, has directed several documentaries about him and his films. Many of his lesser films have undergone reevaluation.