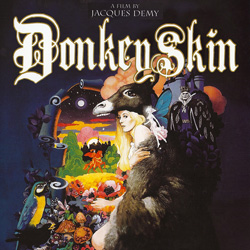 Donkeyskin (in French, "Peau d'Âne") is a popular Fairy Tale transcribed by Charles Perrault in 1697. The Brothers Grimm recorded another variant — "Allerleirauh", translated as "All-Kind-of-Furs" — in 1812, and the tale type has been adapted as "Sapsorrow" in The Storyteller, Deerskin by Robin McKinley, and in 1970 adapted as a musical by Jacques Demy, among other adaptations.

A king loses his wife; on her death bed, she demands that he promise not to remarry except to a woman more beautiful than she is. The king finds it impossible to find such a woman, until he realizes that his daughter is the only one who surpasses her mother's beauty.

The king therefore plans to marry his daughter. The princess in despair begs for her Fairy Godmother's help, and the godmother advises her to declare that she will not marry unless she is brought three impossible dresses: one which is of the color of sky, one which shines like the moon, and a third like the sun. When the king succeeds in providing each of these three dresses in turn, the fairy godmother advises the princess to ask for the skin of the king's magic donkey, from the ears of which tumble gold pieces.

Despite the animal's usefulness, the king slaughters it and presents the unfortunate princess with the skin. The princess then decides to run away, and on her fairy godmother's advice clothes herself in the donkey's skin so that no one will recognize her.

She travels to a far-away kingdom, and takes a menial job at a farm, calling herself "Donkeyskin." The kingdom's prince happens to pass by Donkeyskin's hut while she is entertaining herself by dressing up in her sun-gold dress. He is very taken with her, and in an effort to ascertain her identity he requests that she bake him a cake, in which he finds the princess's ring. The prince then announces that he will marry only the girl on whose finger the ring fits, and tries it on every woman in the kingdom. When the ring fits Donkeyskin's finger, her identity is revealed and the two are married.

The Aarne-Thompson Number is type 510B, the "unnatural love" type of the "persecuted heroine". Others of this type include "Catskin", "Cap o' Rushes" and "Tattercoats", which elide the incestous aspects. Compare to Cinderella, a persecuted heroine whose nemesis is female, and so is type 510A. See also The One-Handed Girl for a different tale type with a male persecutor. Florinda is another interesting relative, which begins with the escape from an incestuous father but then shifts into a totally different tale type, 514: "The Shift of Sex".

The Erstwhile site made a webcomic adaptation.

This fairytale and its variations provide examples of:

The 1970 musical film by Jacques Demy provides examples of: