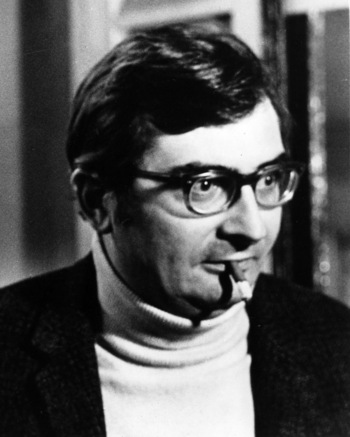 "I'm not at all interested in who-done-its. If you conceal a character's guilt, you imply that his guilt is the most important thing about him. I want the audience to know who the murderer is, so that we can consider his personality."
Advertisement:

Claude Henri Jean Chabrol (June 24, 1930 — September 12, 2010) was a French film critic and director. He was a member of the French New Wave and was known for his work in the thriller genre.

Although Chabrol was from a family of pharmacists, he developed a passion for cinema at a young age, running a film club out of a barn between the ages of 12 and 14. He eventually moved to Paris to study at the Sorbonne. While there, met François Truffaut, Jean-Luc Godard, Éric Rohmer, and Jacques Rivette who he would work alongside on the influential journal Cahiers du Cinema As a film critic he primarily wrote about genre films, co-authoring the first book on Alfred Hitchcock with Rohmer. During this time, he also briefly worked as a publicity man for the French offices of 20th Century Fox. He was fired for being the worst they ever had, only to be replaced by Godard, who was even worse.

He would be one of the first of the Cahiers critics to go into film-making, his Le Beau Serge and Les Cousins being the first two features of the French New Wave. His films were primarily thrillers that functioned as critiques of the bourgeoisie. One of Chabrol's most notable trademarks was his habit of revealing the identity of the killer early in the film, which he believed allowed for greater psychological depth. Although he was very inconsistent in quality (he once made a list of the three worst films of all time that included his own, The Twist), are acknowledged as masterpieces of French cinema.

In 1964 he married Stéphane Audran and they became a Creator Couple as he shot her in numerous films. Though she already played both in Les Cousins and Les Bonnes Femmes.