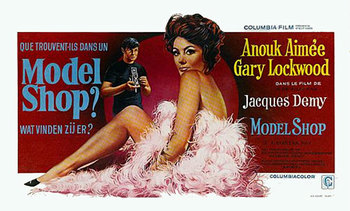 She doesn't get that naked in the movie.
Advertisement:

Model Shop is a 1969 film directed by Jacques Demy.

Gary Lockwood, cinematically best known for getting murdered by a computer the year before, plays George, a would-be architect. The only problem is that George is reluctant to design gas stations and strip malls and the kinds of things just-starting-out architects might be expected to do, having visions of grand creation. As a result he is broke and unemployed and living in the beach cottage owned by his girlfriend Gloria, a model and aspiring actress who is tired of George's shiftlessness and suggests that they break up. George is also facing the prospect of being drafted into The Vietnam War.

If all that weren't depressing enough, the snazzy convertible he bought with money he didn't have is going to be repossessed the very next day if he can't come up with $100. While out and about visiting acquaintances in an effort to scrounge up the money, George sees an exotically beautiful woman in a white dress walking down the street. He follows her to a mansion in the hills. A few hours later he sees her again in the street and follows her to an entirely different destination: a seedy "model shop" where attractive young ladies take their clothes off and horny dudes with cameras take pictures of them. Eventually he finds out that the woman, a Frenchwoman named Cecile (Anouk Aimee) who strips under the name "Lola", is a lonely divorcee who's trying to get the money to return home to her teenaged son in France. The two lonely people form a tentative connection.

One of only three English-language films directed by Demy, who is better known for French musicals. Reeks, reeks of The '60s.