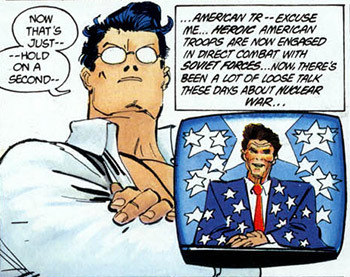 "Has anyone ever noticed Fry always turns the TV on at just the right moment?"
— Bender, Futurama: The Game

Any television or radio accidentally turned on during a tension-filled moment will automatically display a news story relevant to or actually about the current source of dramatic tension. Incidentally, the broadcast will either be just starting or give enough detail for the characters (and viewers) to know what's going on, even if the characters turn on the television on advice from a telephone call. Often the news reporter will come off slightly Medium Aware, saying something like "We repeat..." or (more realistically) "For those of you just tuning in..." From watching this broadcast, the viewer(s) will gain an insight — or a kick in the pants — which will launch the next phase of the story. They will also never start mid-word when turning on the channel.

This is also rapidly becoming a Discredited Trope considering how many sources parody this convention, even if the rise of 24-hour rolling news networks makes it much easier to Hand Wave nowadays. Can be an example of Worst News Judgement Ever, if the story doesn't merit its place in the headlines.