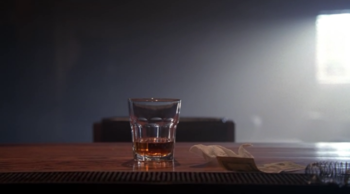 "Do not go gentle into that good night. Rage. Rage against the dying of the light."
"I can't speak for this Heisenberg that people refer to, but whatever... whatever he became, the sweet, kind, brilliant man that we once knew, long ago, he's gone."
— Gretchen Schwartz
Advertisement:

Walt and Saul meet in a temporary hideout provided by Ed, the guy who's providing both of them with new identities. Walt is hell-bent on revenge on the Aryan Brotherhood gang for killing Hank and stealing his money, and he asks Saul for help. Saul says there's nothing he can do anymore, and suggests the best thing Walt could do now is give himself up to the police, so that Skyler and his family doesn't get the blame for his crimes. Walt attempts to coerce Saul into coming with him, but Saul refuses, saying that he is no longer a lawyer and that if he's lucky, he'll be "managing a Cinnabon in Omaha". Walt tries to threaten him further but is subdued by a coughing fit. Done, Saul quietly bids Walt farewell and leaves for his new life in Nebraska.

Jack's gang, meanwhile, have been keeping themselves busy; they break into the Schrader house and recover Jesse's confession tape, and after watching it Jack prepares to execute Jesse for being a rat, but Todd asks him to reconsider, telling him that they can use Jesse to cook more meth for them. Jack is puzzled by the request at first, pointing out that they already have more money than they will ever need after stealing Walt's millions, but he then realizes that Todd wants to impress Lydia, whom he is now infatuated with, and agrees to keep Jesse alive. Shortly after, the gang break into Walt's house and threaten Skyler not to reveal Lydia's involvement, to which a shaken Skyler complies. Lydia visits Todd and wants to end their operation because of all the heat surrounding it, but she reconsiders after he reveals that the meth composition is now at 92% purity thanks to Jesse. At Jack's base of operations, Jesse uses a paper clip to unlock his chains and tries to escape, but he is captured. The gang punishes Jesse by taking him to Andrea's house and forces him to watch as Todd kills her with a shot to the head. They then threaten to kill Brock as well, if he ever tries something like that again.

Meanwhile, Walt, who's now the prime target of a nationwide manhunt, is relocated by Ed to a more secure hideout, which is a remote cabin in the middle of a forest in New Hampshire. Ed tells Walt to lay low for the time being and that he'll return occasionally with whatever amenities Walt requests, but warns him that if he tries to contact the outside world in any way, he will get caught and that if he finds out Walt has made any such attempt he will not be returning for any reason. Walt is still tempted from the first day to walk out and give himself up, but ultimately he doesn't. Instead, he resolves to keep hiding in the cabin, becoming more and more depressed and progressively weaker from his cancer. Several months later, Ed arrives on his monthly visit to bring Walt food and supplies, including a chemotherapy dose which Walt requested, and gives him news about the outside world; namely that Skyler has returned to using her maiden name, that she works as a part-time taxi dispatcher to earn money, and that she and Walter Jr. have left the old house, and that Walt is still being hunted by the authorities. Ed is about to leave, when the lonely Walt, desperate for human contact, offers him an extra $10,000 to keep him company for another hour; Ed accepts and the two play cards. During the game, Walt asks Ed if he could arrange for his family to receive some of his leftover money, but Ed very honestly answers that he simply can't guarantee that he won't just keep the money for himself.

Alone again, Walt stuffs $100,000 of his leftover money into a cardboard box Ed left behind, before he finally decides to step outside of the cabin area and enters a nearby local bar. He calls his son, who has now legally changed his first name from Walter to Flynn, and tries to arrange for the box to be sent to his family, but upon hearing his father's voice Flynn immediately gets upset and refuses to accept anything from him, saying that he wants nothing to do with him because he killed Uncle Hank and finishes the conversation by bitterly asking "Why don't you just die?!" Shaken by Flynn's rejection, Walt finally takes Saul's advice and calls the DEA to surrender himself, leaving the line open so they can trace the call to where he is. Waiting for the cops to arrive, Walt orders himself a shot of whiskey and watches the bar's TV. In doing so, he happens to spot Gretchen and Elliott being interviewed by Charlie Rose on the Heisenberg case. Elliott claims that Walt's only major contribution to Gray Matter was inspiring the name of the company, while Gretchen says that whether or not Heisenberg is still out there, the man they knew as Walter White is now dead. Rose also reveals that Heisenberg's signature blue meth is still in circulation. Walt's anger visibly rises as the interview progresses, and when it is over, he has changed his mind about surrendering.

The police arrive and ransack the bar, but Walt is gone, his unfinished whiskey and a $20 bill the only evidence of him having been there.

"One of these days when you come up here, I'll be dead."