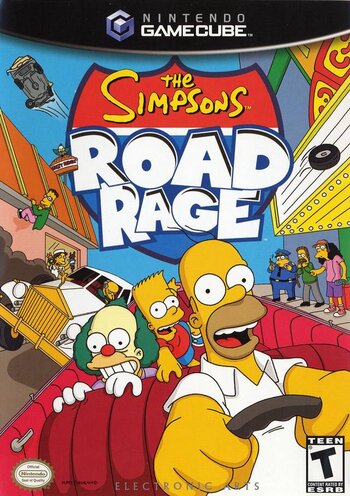 The Simpsons: Road Rage is a 2001 video game developed by Radical Entertainment and published by Electronic Arts. It is one of a series of games based on the animated television series The Simpsons.
Advertisement:

The game has many similarities to Sega's Crazy Taxi, to the extent that Sega sued the developer and publisher in 2003 for patent infringement.

Mr. Burns has bought all transit systems in Springfield and has begun to overcharge everyone for the transportation services. Even worse, the buses are nuclear powered, thus irradiating whoever rides it.

The citizens of the city (managed by the game player) must earn money by driving cars around town in order to regain control of the transit systems. The game contains 17 different drivable/collectible vehicles, six starting locations (five of which are unlockable), and 10 different missions. In order to collect the vehicles and unlock starting locations, players must earn progressively more money for each vehicle or starting location they want to get. In order to complete missions, players must do certain things (such as knocking down 12 baseball team mascots in 45 seconds or running into Gils within a time limit).

To earn money, players must drive around a vehicle for a given amount of time, picking up passengers and taking them to their destinations. Any of the vehicles that the player has collected can be used as taxis. Players have to avoid certain hurdles, such as other vehicles that spin out of control, rocks, flying street objects, Smithers's car, Mr. Burns' nuclear transit buses, and houses on difficult curves.

The game features six locations familiar to Simpsons fans, which have varying levels of difficulty for completing tasks.