Fanfic / The Rise Of Golus 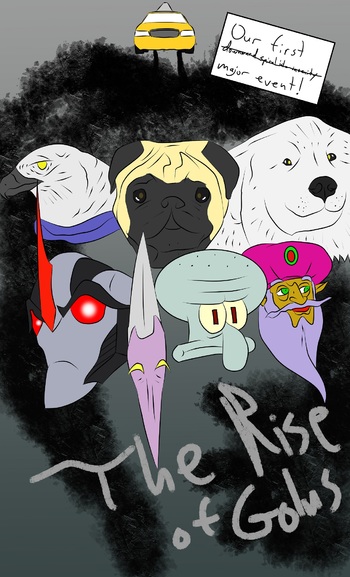 The first "arc" and episodes 6-10 of the Review Team series.

When a monstrous Golem rises in New York, the Review Team is sent to destroy it. However, they fail. Utterly. Sir, however, has a trick up his sleeve and he hires 3 new characters to deal with a problem that's gone semi-worldwide.

The Decepticon Starscream, the crazed Meta-Ridley, the melancholy Squidward, the Wizard of Coradai Gwonam, and (eventually) the unicorn mage Twilight Sparkle have outta be ready for one heck of a rumble. Else, there will be only rubble.

The Tropes Have Come For Us All: