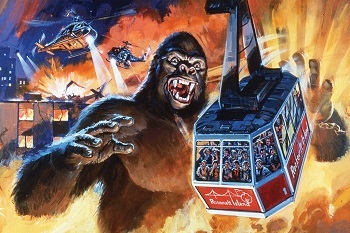 Oh no, look straight ahead! It's him! IT'S KING KONG!
Advertisement:

Kongfrontation was a dark ride that was one of the opening day attractions at Universal Studios Florida, which opened on June 7, 1990. The attraction was based directly off of the 1976 remake of King Kong and also served as an expanded version of the King Kong Encounter scene on the Hollywood Studio Tour.

Guests would start off walking through the streets of New York in the 1970's, eventually wandering into a subway tunnel and then into the station for the Roosevelt Island trams, where an overhead television would be showing an emergency broadcast, revealing that King Kong has broken out into the city and is wreaking havoc. Guests would board the Roosevelt Island trams to be taken to the respective island as part of an evacuation effort, with a tour guide alongside. Things quickly turned to disaster when the trams ended up going in the same direction as where King Kong was going on his rampage. The famed ape would attack the ride vehicles, picking them up and then dropping them. After a second encounter with the beast, the trams would just narrowly escape his clutches and return to the station.

Despite the popularity of the ride with fans and guests alike, it was permanently shut down on September 8, 2002 for varying reasons, often believed to be because of the wide variety of technical issues the ride faced, and the subsequent outrageous upkeep costs that resulted from this. Revenge of the Mummy would later open in its place on May 21, 2004.

However, even long after its closure, the ride has maintained a particularly strong legacy among theme park fans and is commonly cited as one of the most groundbreaking and influential dark rides of all time.

It would later turn out that the legacy of the ride truly would live on, as on May 6, 2015, it was revealed that King Kong would make his grand return to Universal Orlando with the announcement of a brand new ride for Islands of Adventure, titled, Skull Island: Reign of Kong. The new attraction officially opened on July 13, 2016.

Tropes that were shown in Kongfrontation included: