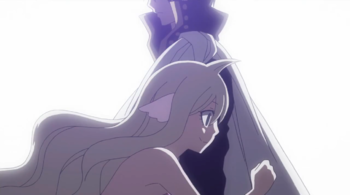 Mavis's encounter with Zeref for the first time
This trope is when the hero and the villain (or any two people at odds with each other) happen to cross paths, purely by coincidence. This might happen at some particularly dramatic moment, though this isn't always the case. Perhaps one of them made a mistake, or the other just got lucky, but in either case, the main point of this trope is that they are both surprised by the encounter, but unaware of who they were until their next meeting. By the time the encounter ends, one of them would look back to see who that person was, as they feel as something unusual had occurred for a slight moment.

For example, Alice may be infiltrating Bob's secret lair. She finagles her way past all the guards and security systems, finally making her way into Bob's inner chamber. Just as she cracks Bob's safe, filled with all his secrets... a toilet flushes in the adjoining room and Bob steps out zipping his fly, unaware that anything had been amiss. Until now, that is.

Another (and more likely) scenario is when the hero and villain simply happen to cross paths without either being consciously aware that the other would be present beforehand. In some cases, they may not even realize who they saw until sometime afterward, when someone else mentions them. Or it could be the Secret Identity is revealed and the hero had been Living with the Villain all along.

A subtrope of Contrived Coincidence. Also compare Villains Out Shopping, which is one of many possible setups for such an encounter.