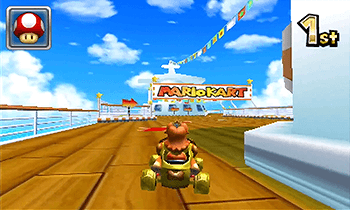 Many video games, particularly stealth games and First Person Shooters (oftentimes in multiplayer maps), feature levels that require the player to navigate the inside of a ship. From a game design perspective, there are good reasons why a level taking place in a ship is convenient, some of which overlap with the reasons why it might be fun to play hide-and-seek on a ship:
Advertisement:

A specific subtrope of this is Gangplank Galleon. Related to Down the Drain in that a sewer level and a ship level can share some qualities, such as maze-like design and aesthetic similarities. It does not necessarily coincide with Get on the Boat. Contrast Battleship Raid, which takes a similar idea in a different direction.

This level features several tilting ships and even has you go inside one thats partially submerged.

This level features several tilting ships and even has you go inside one thats partially submerged.