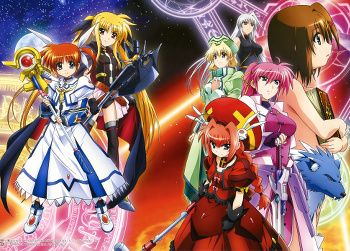 The second season of the Lyrical Nanoha franchise, set six months after the original series.

Nanoha and Fate are working together with the TSAB to investigate an artifact of incredible power called the Book of Darkness, which has been linked to a number of attacks on magi that have left the victims drained of mana.

Unknown to them, the Book of Darkness has attached itself to an orphaned girl in a wheelchair called Hayate. She just wants to have a family, and she lovingly adopts the sentient defence programs of the Book - a sympathetic female team of three and their Non-Human Sidekick - as her own.

Even moreso than its predecessor, this is the show that really set the tone and concept of the entire franchise in stone, and made it far bigger than just "magical girls get a little Super Robot". It's widely considered to be the best season of TV Nanoha by fans and critics alike, and every Nanoha product afterwards, not to mention a decent bit of wider anime and other media, owes something to it and tries to emulate what made it successful.

It has a supplementary Slice of Life manga and Sound Stages that take place between the episodes. The Bandai Namco Entertainment games for the PlayStation Portable, The Battle of Aces and The Gears of Destiny, are Alternate Continuity sequels to A's, which change the events of the last episode. A movie remake of A's, known as The Movie 2nd A's, was released in 2012, following the continuity of The Movie 1st.

The anime was licensed and dubbed in North America by Geneon, but is now out of print. After Geneon USA shut down, Funimation took over distribution of the original series and A's until the licenses for both series expired in 2011.

The movie and its supplementaries additionally/alternatively provide examples of: