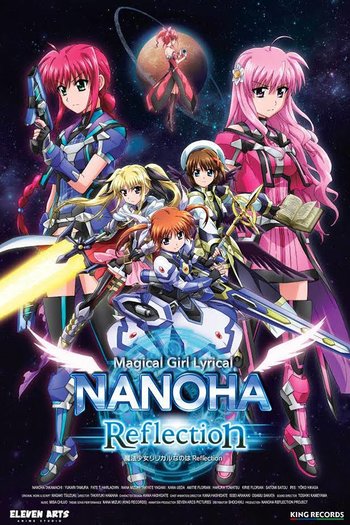 Magical Girl Lyrical Nanoha Reflection is the third movie in the Lyrical Nanoha film series, and the first one not to be a retelling of a previous season (though it does borrow several elements from the PSP games and Force).
Advertisement:

The planet Eltria, having suffered severe desertification in the past, has all but been abandoned. Kyrie Florian travels to Earth alongside her best friend, the A.I. Iris, in search of the Eternal Crystal, which would have the power to both revitalize the planet and cure her father's terminal illness. However, the only way to find it lies within the Tome of the Night Sky, leading them into conflict with the TSAB.

Reflection is the first half of a two part story, having been released on July 22, 2017 (with a limited theatrical release in America the following year). The second half - Detonation - was released in Japan on October 19, 2018.